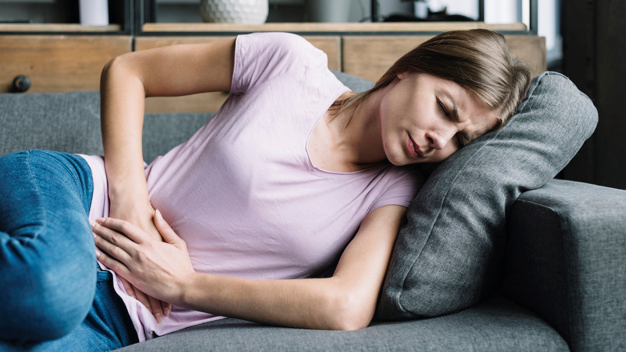 Dysmenorrhea, or painful menstruation, is a very common problem that affects a large part of the female population. In traditional Chinese medicine (TCM), it has been viewed as a disease or imbalance for thousands of years, and has been treated since then by regulating patterns of imbalance.

It is an ailment that can occur before, during, or after the period. In severe cases, the pain can extend from the sacral region to the back of the legs, although the pain usually occurs in the lower abdomen and in the region around the sacrum. In the most severe cases there may be nausea and vomiting, and even fainting.

Many times all these symptoms are accompanied by mood swings, especially before and during the period, (at which time the person experiences changes in emotional and sensitive state) and in many cases migraines or migraines are also activated. In milder cases, it boils down to pain in the pelvic area or lower abdomen, and lower back pain and mood swings. In all these cases the menstrual flow is usually accompanied by clots and dark blood and depending on the severity, color and quantity of the clots varies.

From the perspective of TCM, many of these symptoms form a pattern, defined as syndromes. Each case of dysmenorrhea can be different, even if there are similar symptoms. The patterns of imbalance found when there is dysmenorrhea are; qi (vital energy) stagnation, blood stagnation, cold stagnation, humidity heat, liver qi stagnation creating heat (fire), qi and blood deficiency, yang and blood deficiency, liver yin deficiency and kidney.
Once the precise diagnosis of traditional Chinese medicine is made, we can regulate and balance any of these patterns of imbalance with acupuncture, herbal medicine, acupressure (shiatsu), moxibustion….

We promote regulating the body just as it has been doing for millennia, tonifying where there is deficiency and eliminating excess where necessary. In this way we regulate affected organs or meridians and recover the natural state of health.

According to traditional Chinese medicine, the menstrual flow should be neither too long nor too short (between 3 and 7 days), neither too abundant nor too scanty, the blood must be of a normal color, neither too bright nor too dark and no clots.

It is important for the woman that her menstruation is the closest to these measures, in order to promote her health in the long run. The state of qi and blood and the balance between yin and yang is essential to keep the period in its proper functioning. Above all, avoid in the first stay the stagnation of qi that in the end results in a stagnation of blood and consequently leads to a painful menstruation.

Qi is stagnant by prolonged emotions, especially anger, frustration, sadness and fear, although the uterus is more affected by anger and frustration since they affect the liver more and the liver is is the one that moves the energy and the blood in the uterus. The cold also makes the blood lose temperature and causes it to not flow properly and stagnate it. It also affects the normal flow of qi energy and blood deficiency that by deficiency causes the blood to not flow.

To avoid painful periods or dysmenorrhea therefore it is important to avoid cold in the vagina, and uterus area. It is advisable to change the bikini after bathing for a dry one, to prevent moisture and cold from entering the uterus. It is also advisable to avoid the use of tampons, to avoid stagnation of blood caused by its “tamponade”. For the same reason, it is important not to have sexual intercourse during the days of menstruation. It is especially important to avoid cold in the uterus and vagina in the period of puberty since at that age the area is especially vulnerable.